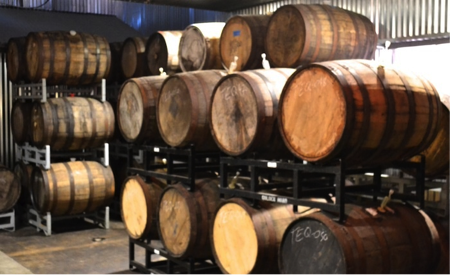 When you crack open an ice-cold beer, chances are you’re not thinking about climate change. But Tony Yanow is. Yanow is the co-owner and co-founder of Golden Road Brewery in Los Angeles, and like the 400 other craft breweries in California, he’s starting to feel the sting of the drought.

Beer is about 10% grains, hops, and assorted flavorings. The other 90% is water. And when you’re brewing beer in California, where river basins are quickly drying up, that’s a serious problem.

The drought is three years old at this point, but even though lawns are being left to die and fountains are shutting off, breweries are still producing lagers, IPAs, and stouts. (Beer is, after all, the third-most-consumed beverage in the world, so there’s plenty of demand.) But according to Tom McCormick, executive director of the California Craft Brewer’s Association, the drought has begun to tangibly affect breweries in major ways: It’s forced some to use lower-quality water in their brews or invest in expensive water-purification technologies, for instance, and it’s caused beer production costs to creep up thanks to the rising cost of water.

At Golden Road Brewery, the question of what to do about the water has become a daily debate. The brewery will churn out more than 31,000 barrels of beer this year (one barrel is about 31 gallons). For every gallon of beer, they’ll use about four gallons of water—and that’s a conservative ratios for a craft brewery. If you do the math, that’s roughly 4 million gallons of water each year, and that figure doesn’t account for the amount of beer that’s spilled or the amount of water required for cleaning the massive fermentation tanks.

Golden Road gets their water from the Los Angeles municipal supply, which is then treated and filtered until it’s clean and suitable for brewing. But because of water scarcity, Los Angeles gets its water from a few different sources—local groundwater, imported groundwater, and water from the Colorado River Aqueduct—meaning that the resulting beer doesn’t always taste the same. To a layman, it’s nearly impossible to tell, but those subtle differences in mineral quality or water softness have a noticeable effect on the flavor. “Sometimes we’ll sit around and ask, ‘Why does this beer taste different?’ Many times, it’s the water,” said Yanow.

So there’s a big incentive for breweries to invest in technologies that will either improve the quality of water they’re getting or secure access to another stable source of water. One option is reverse osmosis.

Reverse osmosis—RO, in brew slang—is a purification method that strips water of all its minerals, salts, and other contaminants. It’s a complex process of heating, cooling, and evaporating the water, but it eventually simplifies water into what is essentially a “blank slate,” rendering it perfect for brewing.

“Then you can add back all the things you want—harden it, soften it, you can get it exactly right, and make subtle changes to the water so that it’s going to be the same every time,” Yanow explained. That’s why lots of bigger craft breweries—like Stone Brewing Company in San Diego, for example—use RO to stabilize their water sources and guarantee clean, crisp water in their brews.

But there’s a catch: You lose about 20 percent of the water in the process. That loss is hard to swallow when, as in California right now, water is neither bountiful nor cheap.

“Water is expensive here—it’s really a precious commodity—so from a business standpoint it doesn’t make a ton of sense to do that,” said Yanow. “And from an environmental stance, it doesn’t make sense either.”

But it does make sense from a quality standpoint, which brewers recognize is the most important thing. Yanow shrugged, noting that RO might be the best option—especially given that there aren’t very many alternatives.

“If the water is increasing in price and it’s scarce, we don’t have the capability to start welling our own water,” he said.

For some breweries in drought-stricken Northern California, however, wells may be the best option to ensure that their source of water doesn’t run dry altogether. Bear Republic, a craft brewery in Sonoma County, shelled out almost half a million dollars last year to drill wells to safeguard their local groundwater. It’s an expensive process, and it’s not without its own problems: Well water’s mineral content makes it less preferable than water from the Russian River, from which Sonoma County breweries currently get their supply of H2O.

“It would be like brewing with Alka-Seltzer,” said Jeremy Marshall, head brewer at Lagunitas Brewing Company, in an interview with NPR back in February. But Lagunitas, which is located in the southern part of Sonoma County, has since been forced to blend portions of groundwater into their brews, and some breweries in Northern California anticipate that they may soon have to switch over to using groundwater entirely.

To prevent that from happening, Leon Sharyon, CFO of Lagunitas, said that they’ve begun a water treatment project that will curb their water use by 40%. It involves “an EcoVolt anaerobic digester to treat our high strength waste on-site and a combination of an aerobic digester, UF membrane filter, and RO filter to further polish all liquid waste to the point where we can reuse it on site for different cleaning and non-product processes.” It’s an ambitious project, no doubt, but with any luck, it’ll safeguard them from possible restrictions on water use in the future.

Southern California, breweries haven’t been faced with mandatory water restrictions yet, but the prices of water are steadily rising. When those price hikes appear on a home water bill they might seem benign, but at a brewery that’s using gallons of water each day, it can quickly add up to hundreds of thousands of dollars.

Elsewhere in the country, water is much cheaper. The cost alone is an incentive to close shop in California and move your brewery closer to a reliable water source (Lagunitas, notably, opened a second brew house in Chicago this year, next to free flowing Lake Michigan). Breweries could import water into the state, but the cost outweighs the savings.

The final alternative? To not treat water at all—which would cost significantly less, at the expense of the beer’s quality.

“If your product is 90 percent water, you have to start with clean water,” said Victor Novak, head brewer at Golden Road. “Just like if you use poor malt or poor yeast or old hops, you’re never going to get to where you want to be.”

But climate change also threatens the supply of barley and hops. Most barley in the US grows in areas unaffected by the drought, but growers of hops—which, domestically, comes primarily from the Pacific Northwest—are struggling to meet the demand. That’s partly because of volatile water sources, but also because of the massive expansion of the craft brewing industry, which has caused what some have deemed a hops shortage.

Given the dryness, you’d think craft breweries would be on hold. But instead, they’re expanding rapidly. Environmental concerns aside, the craft beer economy is booming. While overall beer sales were down 1.9 percent last year, craft beer sales were up 17.2 percent according to stats from the Brewers Association. In California alone, craft breweries sold $4.7 billion worth of beer in 2012 and the industry supports over 240,000 jobs—the highest concentration of brew-related jobs in the nation—which brings in $11 billion in wages for Californians. Beer is a behemoth industry, and craft beer is having a moment.

Unlike beer’s big wigs—Anheuser-Busch, MillerCoors, Heineken—craft breweries tend to be smaller and independently owned. Their beers are brewed with more traditional ingredients and more robust flavors, a nod to old-style beer-making techniques. Many craft breweries are small-scale beer producers, which is part of their charm. But brewing less also makes it difficult for them to justify investing in the more expensive water-saving technologies—what McCormick describes as “complex devices like automatic shutoffs on valves, or packaging lines that can be retrofitted to use less water”—given that the return on investment is longer.

None of this would be an issue if California weren’t in a drought—but it doesn’t seem like that will be resolved any time soon. The US Drought Monitor now classifies more than 90% of California as affected by “severe drought.” This year California is expected to lose over $2 billion in lost crop revenue, livestock, and jobs as a result. Parts of the Sierra Nevada foothills, in central California, no longer have running water at all, forcing residents to rely on bottled water for everything from drinking to flushing the toilet. So much groundwater has been pumped that some parts of California’s mountain ranges have actually started to move upward.

And it’s not just California: Dry patches stretch across the West, and nearly 20% of the continental US now qualifies as being in “severe drought.” Major water sources—like the Colorado River, which snakes through seven US states and forms the major watershed of the Southwest—have begun to dry up due to a lack of rainfall. The Colorado River Basin has lost 53 million acre feet of freshwater in the past decade.

As California crawls toward its fourth year of extreme drought, the water-related challenges could push some California craft breweries to close and others to increase their prices. Still, Yanow is clear that the craft brewing industry is here to stay—even if the drought is, too.

“Look, we live in a desert,” Yanow said. “There’s not going to be any rain in the next year, because there wasn’t that much rainfall in the first place. But with climate change and the fact that we’re in the desert, it’s gonna be worse and worse and worse.”

“Your Favorite Beer Could Be Threatened by California’s Drought”. Vice.Com. 3/10/14 <http://www.vice.com/read/the-drought-is-causing-serious-problems-for-californias-craft-breweries >.