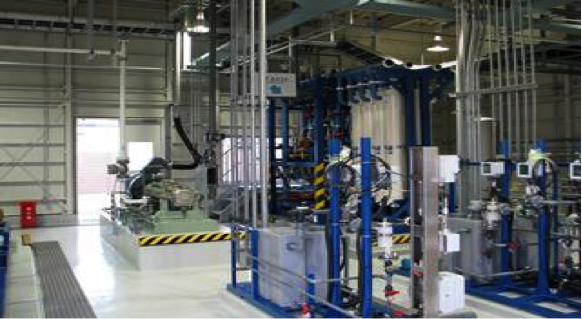 TOKYO — Hitachi and Toray Industries are moving forward with water desalination technologies that can cut energy consumption by 30-40%, making treatment less expensive and more accessible for emerging markets with a growing need for water.
A plant developed by Hitachi dilutes seawater with treated sewage, halving the salt concentration, before purifying it through reverse osmosis. This reduces the pressure applied to the membrane, lowering the electricity required by 40%.
Operational costs, including chemicals and plant maintenance, can be cut about 40% as well. The technology is expected to find applications mainly in industrial water.
Current desalination processes generate brine with double the salt concentration of ordinary seawater as a byproduct. The continued release of brine into a small part of the ocean could affect the local ecosystem.
Hitachi’s new process generates brine with roughly the same salt content as ordinary seawater, minimizing the burden on the environment.
A plant with a daily processing capacity in the tens of thousands of tons would cost 5 billion yen to 7 billion yen ($48.31 million to $67.63 million) — not significantly more than a conventional plant. It would require just 2.6 kilowatt-hours per cu. meter of water.
Toray has announced a reverse-osmosis membrane with 1.5 times as many holes for water to flow through. The pressure needed goes down by one-third, cutting power usage by 30%.
The membrane will hit the market as early as this year, likely costing somewhat more than conventional products. It lasts twice to 10 times as long in tests, according to Toray, thanks to increased resistance to cleaning chemicals. Anticipated uses include processing water from inland rivers and processing sewage.
China and India are expected to be the main markets. The company plans to extend sales into other growing emerging markets as well.
Water shortages are becoming a serious problem in developing countries as their economies grow and water pollution worsens. As demand for desalination plants rises, cost reduction has taken on greater importance.
Hitachi estimates that 10-20% of desalination plant projects will meet the requirements for the energy-efficient plants. It sees potential global demand of 200 billion yen a year by 2020.
Toray holds a roughly 30% global share in reverse-osmosis membranes, trailing market leader Dow Chemical. Such companies as General Electric and France’s Veolia Environnement dominate in desalination plants, while Hitachi still languishes with few overseas orders for large plants.
(Nikkei)