Can California Desalinate Its Way Out of a Drought 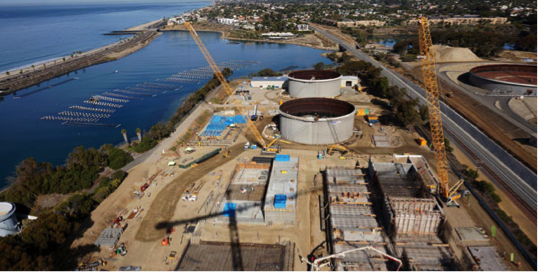 A ferry plows along San Francisco Bay, trailing a tail of churned up salt, sand, and sludge and further fouling the already murky liquid that John Webley intends to turn into drinking water. But Webley, CEO of a Bay Area start-up working on a new, energy-skimping desalination system, isn’t perturbed.   “Look at the color of this intake,” he says, pointing to a tube feeding brown fluid into a device the size of a home furnace. There, through a process called forward osmosis, a novel solution the company developed pulls water molecules across a membrane, leaving salt and impurities behind. When low temperature heat is applied, the bioengineered solution separates out like oil, allowing clean water to be siphoned off.

This method uses less than a quarter of the electricity needed for standard desalination, making it easier for the technology to run on renewable power, said Webley. His company, Trevi Systems, recently won an international low-energy desalination competition and is building a pilot solar plant to desalinate seawater in the United Arab Emirates.   With world water demands rising and extreme droughts like the one now gripping California expected to grow more frequent and widespread as the climate warms, drawing fresh water from oceans and other salty sources will be increasingly important.

“Eventually, we’ll have to develop new sources of water,” said David Sedlak, a University of California, Berkeley, professor of civil and environmental engineering and author of Water 4.0: The Past, Present and Future of the World’s Most Vital Resource. Desalination, along with wastewater recycling and capturing and storing rainwater, will be “three main pillars,” he said, to replace “water supplies that are going to become less reliable and less available in the future.”

However, desalination is expensive, energy-intensive, and can damage marine ecosystems. Moreover, while seawater accounts for 60 percent of desalinated water today, Sedlak and others say it’s much more practical and sustainable to desalinate less-salty brackish water and use the technology to recycle wastewater. So companies around the world are working on new technologies that cut desalination costs, reduce environmental impacts, and broaden its applications.   In addition to removing salt from seawater, technologies like Trevi’s also can economically cleanse brackish groundwater, industrial effluent, and other forms of liquid waste. That includes desalinating sewer water to recharge groundwater aquifers, which it will soon begin doing for a large urban water district in Southern California.   “That’s what’s particularly interesting to us — we can run on really, really dirty water,” Webley said. “Where you really should start with this whole thing is, let’s squeeze everything we can out of re-use and then start talking about other options.”   More than 17,000 desalination plants are now operating in 150 countries worldwide, a capacity that could nearly double by 2020, according to the United Nations World Water Development Report 2014. Desalination produces 21 billion gallons of water a day, according to the International Desalination Association, providing a crucial water source in arid places such as the Middle East and Australia. Major new desalination facilities are in the works in China, Chile, and elsewhere.

However, the current standard technology, reverse osmosis — in which high-pressure pumps force water through semi-permeable membranes to exclude salt and impurities — uses large amounts of energy and has an outsized impact on the environment. These effects include damage to aquatic ecosystems, such as sucking in fish eggs with its intake water; using harsh chemicals to clean membranes; and releasing large volumes of highly salty liquid brine back into the water. Costs vary, but the lowest price for desalinated seawater from a reverse osmosis plant is around $750 an acre-foot (325,851 gallons) — more than double the average cost of groundwater.

Engineers and entrepreneurs across the globe are now trying to devise greener desalination. Some are inventing new alternatives to traditional reverse osmosis. Among them: Israel, whose own dependence on desalinated water has made it a world leader in the process, has come out with several state-of-the-art technologies, including a novel “semi-batch” reverse osmosis process developed by Desalitech that shrinks energy and brine, and a chemical-free “plant in a box,” produced by IDE Technologies; and Memsys, of Singapore and Germany, is working on hybrid-thermal membrane technology that is energy-efficient enough to run on solar power.   In the United States, water-strapped California, leads in both innovations and needs. The largest seawater desalination plant in the Western Hemisphere, a $1 billion state-of-the-art reverse osmosis facility being built near San Diego, is set to begin producing 54 million gallons a day — supplying water to 300,000 residents — in early 2016. At least 15 other desalination plants on the West Coast are currently in some stage of planning, and some small ones are already operating.   But residents’ concerns about the expense and environmental impacts like chemical use and brine disposal problems have slowed down and even halted some recent projects.   “Desalination is a really a hot button issue in California — a lot of people oppose it,” said Aaron Mandell, co-founder and chairman of Water FX.

Mandell hopes to quell those concerns with his company’s new process utilizing large parabolic mirrors to collect and concentrate the sun’s energy. Inside this solar still, pure water evaporates, while solids remain behind. The system is currently being tested by a water district in California’s agricultural Central Valley, cleaning irrigation runoff tainted with salts leached from the soil. The demonstration is now producing about 14,000 gallons of fresh water a day — a welcome boon to local farmers who received no water from federal allotments this year. The company plans to expand and boost production to 2 million gallons a day early next year.

Mandell points out that his salt byproduct is dry and can be mined for useful chemicals, rather than winding up with hazardous brine that’s costly to discard. What’s more, water districts and farms otherwise have to fallow land and lose income to dispose of the brackish effluent now being recycled into new water for crops.

“We saw the opportunity to take something that was costing quite a lot of money as a waste product and turn it into something of value,” he said. “In essence, we are tackling both sides of the water problem … disposal and re-use.   “One of our biggest challenges,” Mandell said, “is that we are dealing with a lot of agricultural businesses that still sort of pray for rain. A lot of farmers do really rely on these seasonal water cycles. So getting people to think differently about climate change rather than just seasonal drought is definitely a challenge.”   Researchers at Lawrence Livermore National Laboratory and Stanford University are working on a new desalinating method using porous carbon aerogel electrodes. The system, which they call flow-through electrode capacitive desalination, or FTE-CD, removes salt electrically. Although still in the early stages, its developers say the technique requires little equipment or energy, and the system could be scaled to fit any need: from portable personal devices to city water treatment.   “In places like California, where there is brackish groundwater in large volumes, FTE-CD can provide potable water at a potentially much lower cost than sea water desalination could achieve,” said co-developer Michael Stadermann, a physical chemist at Lawrence Livermore. “For desalinating brackish water, we predict that this method could be up to five times more energy efficient than reverse osmosis.”

One of the hottest new technologies on the bench in laboratories in the UK, Saudi Arabia, and South Korea and elsewhere is one-atom thick, perforated graphene membranes that can cut reverse osmosis desalination to a fraction of its current cost. Developed at the Massachusetts Institute of Technology, the membrane’s pores can be tuned to optimize permeability. The hang-up for now is how to mass-produce the material.

For urban water needs, even those working on alternative methods say reverse osmosis (RO) will likely remain the top choice for the foreseeable future.   “You can talk about some of the other technologies, and I work on some of them,” said Menachem Elimelech, professor of environmental and chemical engineering at Yale University and director of Yale’s Environmental Engineering Program, “but if you need to produce water for the drinking water supply, I still think RO is the gold standard.”   Reverse osmosis has become much more energy-efficient in recent years, and is now near its maximum, Elimelech said. Still, he and others are trying to make further gains by improving membranes. One of the biggest problems is fouling — biofilms that grow on membranes over time, making pumps work harder to force water through. Elimelech is working with nanotechnology to make bacteria-resistant membranes.

New methods for recycling energy also cut the electricity needed to pump water through membranes. Manufacturer Energy Recovery Inc. estimates that its piston-like pressure exchangers being installed in the new San Diego-area reverse osmosis plant will save 115 kilowatt hours of electricity annually — equivalent to keeping more than 45,000 tons of climate-warming carbon dioxide out of the air.

Even so, desalinated water produced by the new plant will cost the San Diego County water district around $2,000 an acre-foot — twice as much as it currently pays for freshwater shipped in from the Colorado River and San Joaquin River Delta. Those sources, however, are over-tapped and growing increasingly unreliable, leaving residents of a county with scarce water resources to feel they have few other options.   Much of the world may someday feel that same pinch, making drought-proof water supplies priceless in a parched future. But for now, many experts say, while emerging technology is making desalination ever more viable, the economic and environmental costs are still too high.   “There are technologies available to minimize and in some cases eliminate some of the environmental impacts,” said Heather Cooley, director of the water program at the Pacific Institute, a non-profit research organization in Oakland, Calif. Burying water intakes, for instance, keeps marine life out, and diffusers can dilute brine to safer levels.

As for “the other environmental impact: the energy use and the resulting greenhouse gas emission,” Cooley said, technological advances are lowering both, but the question remains, “Are there other alternatives available?”

“Can California Desalinate its Way Out of a Drought”. 19/10/14 accessed. <http://thebreakthrough.org/index.php/programs/conservation-and-development/can-california-desalinate-its-way-out-of-a-drought>.