10 ways technology is changing the future of water 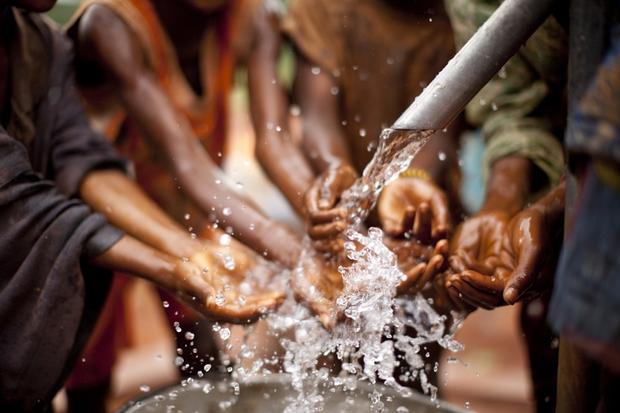 About 780 million people live without access to clean drinking water, and a growing global population coupled with climate change is threatening to increase that. Here’s how technology can help.

Did you know 780 million people, or one in nine people in the world, live without access to clean drinking water? About 3.4 million die each year from water-related diseases. Those stats probably make you think about how often you accidentally leave the faucet dripping, or take too long in the shower, or even pour out a few Dasani bottles you never finished.

Water security isn’t limited to access to drinking water. It’s about sanitation — more people worldwide have mobile phones than toilets, but Americans waste more water by flushing toilets than any other use, according to the EPA. And it’s about climate change — melting glaciers, rising seas, flooded coasts, and longer droughts.

According to the United Nations, by 2025, 1.8 billion people will be living in water scarcity, and the demand for irrigation will jump by 15%. Though it’s not a silver bullet, technology can help to change this course, and it’s already starting to. Here’s how.

The interest in water technology is growing amidst the concern over droughts, water shortage, and a warming climate. A San Francisco start up and accelerator, Imagine H2O, organizes and encourages innovations in the water industry to use technology to raise awareness about these issues and solve big water problems.

Foundations and large corporations fund the projects by the non-profit, and Imagine H2O recently held a competition for new, empowering water projects. Big corporations like Coca Cola are also taking an interest in conserving and recycling water. And hardware start ups that are create cheap, efficient water filters and purifiers are popping up all the time.

Last year, researchers at the Indian Institute of Technology developed a $16 nanoparticle water filtration system. Although cheap filtration systems have been created in the past, this was the first that had the ability to remove chemical components like lead and arsenic from the water. The iron and arsenic trapping ions released by nanoparticles make up the chemical filter. The purifier has several levels of membranes to block contaminants.

WaterSense irrigation controllers were created by the EPA. It’s a certification process for controllers that act as thermostats for irrigation systems, such as home sprinklers. The EPA reports this could save the average home 8,800 gallons of water annually. Instead of using standard clock timers, WaterSense controllers allow watering schedules to better match plants’ water needs by using local weather and landscaping conditions to figure out how much water is necessary. The controllers are independently certified.

The first one certified by WaterSense was Cyber Rain, which provides irrigation solutions for builders, developers, businesses, and homes. It works with automatic sprinkling systems and wirelessly communicates the information to the controller. Customize the schedule to meet your needs and it runs in the background.

Toyota unveiled its hydrogen fuel cell production car, rumored for release in 2015, at CES earlier this year, though the company recently said it plans to start producing the car even earlier — this December. The car is not the first hydrogen-powered car to be released, of course, but it would be the first mass produced one of its kind. The electricity is generated by a combination of hydrogen and oxygen cells which in turn powers the car. The only emission from the car is water vapor. The performance of the car would be similar to the Prius, though much more expensive. Of course, there are still very few fueling stations for hydrogen fuel cell vehicles, but this could change the game.

Desalination technology is becoming more efficient — and more important because of growing water security issues. Many arid places in the world, such as Chile, Israel and Saudi Arabia, have turned to ocean water desalination for a water source, and now California is joining them. About 15 projects have been proposed up and down the California coastline, though the old technology is judged pretty critically because of the high costs and endangerment to aquatic life.

The largest desalination plant is under construction in San Diego County, California, planned to be finished in 2016. About 50 million tons of water will be stripped of salt and other minerals through reverse osmosis to offset 7% of the county’s water use. A plant in Beijing, China, which should be finished in 2019, will provide a third of the city’s water. Other smaller plants around the world are using solar desalination to treat the water, which may be more feasible.

The data and analytics company said that its goal is to take the fragmented data that is out there about water — and there’s quite a bit of it — analyze it, and make it accessible to anyone who wants to use the service with actionable reports and market intelligence available to companies who want to use the data.

Researchers at the U.S. Naval Research Laboratory, Materials Science and Technology Division, may be able to take the carbon dioxide and hydrogen from seawater and turn it into forms of gasoline for US Navy aircrafts. A metal catalyst turns the gases into liquid hydrocarbons to run the engines, and it was tested on a small aircraft. If the production is increased, the fuel could cost anywhere between $3 and $6 per gallon.

The Gates Foundation held a Reinvent the Toilet Challenge in 2012, because 2.5 billion people in the world lack access to safe, sanitary toilets. The winners of the challenge were researchers and engineers at Caltech who created a toilet that turns waste into fertilizer, and uses much less energy and money to do it.

A solar panel powers an electrochemical reaction that breaks down human waste into solids for fertilizer and hydrogen for fuel cells that are stored in the reactor to power the toilet when it’s cloudy outside and the solar panels won’t do. Recycled water is pumped back up and used again — and the toilet is completely self-contained, no sewer connection needed.

It’s supposed to last 20 years and costs 11 cents a day to run. The toilet is still in its trial phases, with one project running in India, but Kohler (the well-known plumbing equipment company) is working on designs for a system to scale the project for this toilet as well.

In a time of devastating drought in places like California, sensors and drones to monitor water waste and usage are looking like an appealing investment to farmers, academics, tech companies, and researchers.

One company making these drones is PrecisionHawk, an Indiana-based startup. They use small plane-like drones that fly in the air to monitor and survey the field. The company wants farmers to integrate these seamlessly into their lives to make gathering data much easier. With drones, farmers can find out when and where fertilizer and irrigation is most needed, therefore reducing wastewater, runoff, and contamination from the chemicals. The company states the drones are also useful for watershed mapping, surface mapping, and disaster response.

The dire future of water on this planet is causing scientists to get creative with their methods of water purification and filtration. One of the newest ones has come out of Michigan State University, and it has big potential. Scientists have developed a water filtration technology that turns cow manure into filtered water that can be used as fertilizer.

Manure is mostly made of water, and there’s a lot of it on farms — and a lot of cows in the world as well. The researchers said that 1,000 cows can produce up to 10 million gallons of manure a year.

This technology uses an anaerobic digester, which takes waste and produces energy, combined with an ultrafiltration, reverse osmosis system to create the water byproduct. The water can be fed back to livestock as drinking water because it is so filtered. About 100 gallons of manure can generate 50 gallons of clean water, and the team is already looking into how to take that number even higher.